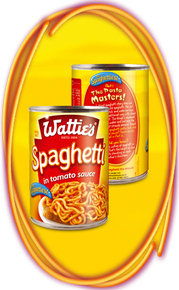 We’ve decided to share some of the great facts about how NZ’s favourite Spaghetti is made.

To create New Zealand's favourite spaghetti, we start from scratch and make our own fresh spaghetti. We use tomato paste from field-grown tomatoes for our rich, red sauce. The perfect amounts of fresh spaghetti and sauce are sealed in each can and cooked under pressure. There are no added colours – just Wattie's thick, tasty, 99% fat-free spaghetti. It won't slide off your toast because it's the spaghettiest spaghetti around!

Here are some great fun facts for all those Wattie’s Spaghetti fans out there.

To learn more about how we make Wattie’s spaghetti look for our new packs in store!

Did you also know that we have six other great Spaghetti products for you to enjoy!

To find out more about the Wattie’s Spaghetti range click here.